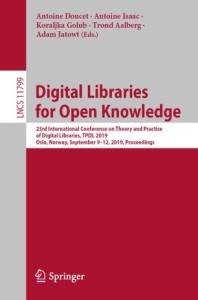 Maristella Agosti, Professor in Computer Science at the University of Padua and one of the key persons in the development of the Digital Libraries field, is winner of the Tony Kent Strix Award. The Tony Kent Strix Award recognizes an outstanding contribution to the field of information retrieval in its widest sense. The 2017 Annual Lecture was given by Maristella Agosti, Winner of the Award in 2016. The Annual Lecture series is sponsored by Google. You can find her presentation here. 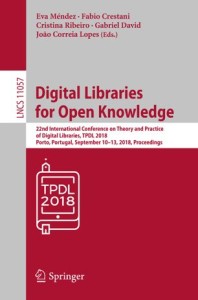 Recently, an interesting article on the development of the field of digital libraries by two key persons of our community was published on LIBER Quarterly. LQ is an open access journal and you may find the article at:

Thanks to the great work of TPDL2015 organizers, the video recordings of its sessions have now been posted online at http://platontv.pl/adv?page=1&serie=TPDL%202015&lang=-1&order=1&main=true. 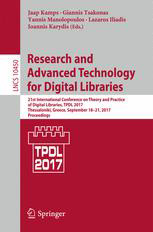 The Steering Committee of the TPDL – INTERNATIONAL CONFERENCE ON THEORY AND PRACTICE OF DIGITAL LIBRARIES, invites persons and organizations to submit a bid for hosting the conference in 2018, 2019 and 2020.

TPDL has been the leading scientific forum on digital libraries since 1997. Until 2011 the conference was named European Conference on Research and Advanced Technology for Digital Libraries (ECDL). Information about the previous ECDL/TPDL conferences can be found at http://www.tpdl.eu/?cat=3.

The conference includes a variety of events in order to produce a rich and stimulating programme. Typically, a Conference includes (but is not necessarily limited to): (i) Tutorials, (ii) Workshops, (iii) Doctoral Consortium, (iv) Research papers, (v) Panel discussions, (vi) Posters & Demonstrations, (vii) Other co-located events, such as project meetings, and (viii) Social Programme.

Past conferences attracted 200-300 participants, and were usually held in the first weeks of September. TPDL has a long established cooperation with Springer-Verlag and its proceedings are being published in the frame of Lecture Notes on Computer Science, being indexed by the most important scientific databases and aggregators.

Expressions of interest and bids must be sent by email to the Executive Board of the Steering Committee (Jose Borbinha, Chair; George Buchanan, Deputy Chair, Giannis Tsakonas, Secretary), to the following addresses: jlb@tecnico.ulisboa.pt; George.Buchanan.1@city.ac.uk; john@lis.upatras.gr. 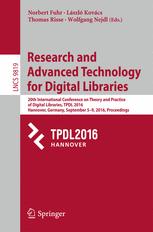 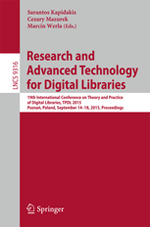 TPDL proceedings are published by Springer-Verlag in the Lecture Notes on Computer Science series.

The International Journal of Digital Libraries is the main associated journal of the conference, hosting many papers in its focused issues.

Focused issues of the Bulletin of IEEE Technical Committee on Digital Libraries are the publication venue of all excellent papers presented in our Doctoral Consortium.